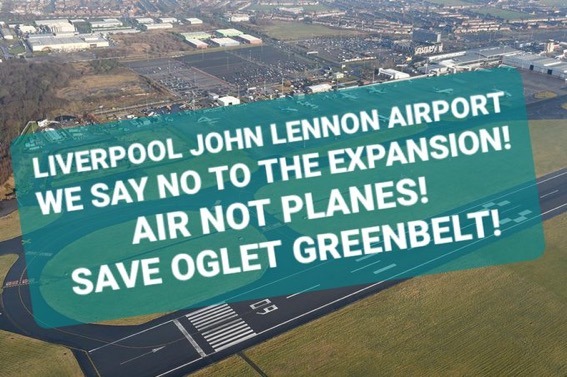 Liverpool is facing both ways on the climate crisis, risking ridicule and failure, Liverpool Green Party Councillor Anna Key will warn councillors as she moves a motion aimed at stopping the expansion of Liverpool John Lennon Airport on to a Site of Special Scientific Interest.

The Green Party motion, which will be voted on at the Full Council meeting on Wednesday January 26, highlights the Council’s own 2019 recognition of a climate crisis and new commitments made in 2021 following COP26 create a net zero economy.

Yet, councillors intend to give an initial green light to expansion of the airport in Speke through a controversial Local Plan that will:

The Save Oglet Shore & Greenbelt campaign, points out: “The expansion plans will damage ‘a vital habitat in an increasingly built up area.’ It adds that airport expansion will reduce public access to the local fields, ponds, hedgerows and wooded cloughs that are important for wildlife, including some species that are endangered.” Sign its petition here.

Liverpool Friends of the Earth, says: “Speke is one of the most green space-deprived communities in England and the Oglet is a much-loved green lung for the area.”

“We need a firm commitment from all political parties to oppose airport expansion. Without it, the council will be held up to ridicule and fail to meet its net zero targets.

“Councillors – and the ruling Labour Group in particular – must show it will take the tough decisions today that are needed to protect the climate for future generations.”

The Green Party motion calls for an urgent review of airport expansion plans, the removal of public funding for the airport and better protection for Green belt.

The proposed new Local Plan will take away greenbelt status from land adjacent to the airport, known as the Oglet, which is now earmarked for the airport expansion.