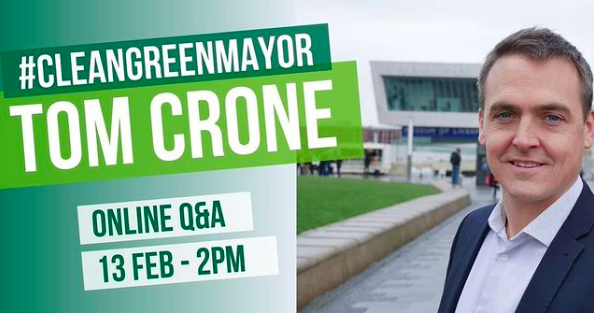 Liverpool Green Party today (Friday February 5) called for May’s local elections to be postponed to protect the public and democracy.

The call came after the Cabinet Office said the elections would go ahead but with restrictions on campaigning and support to get voters to the polls.

The party, which is fielding council candidates across the city and a candidate for city mayor, wrote to Michael Gove, the government’s election supremo, and the Electoral Commission warning that holding the elections would favour ‘large and well-funded parties’.

Green Party councillor, and candidate for City Mayor, Tom Crone added: ‘I’m deeply disappointed that the government has refused again today to do the sensible thing and postpone the elections for a few months so that voters have a fair chance to participate in democracy.’

The party told Mr Gove: ‘Leafleting residents before and during the election period is absolutely essential if candidates are to get their message out to the local electorate so that people can make an informed decision on who deserves their vote.’

Cllr Crone insisted: ‘We stand by our call to give democracy the respect it deserves – postpone the elections now and let’s concentrate on getting our city back on its feet.’

Join Cllr Crone at a Q&A on Saturday February 13 at 2pm. Click here to register.