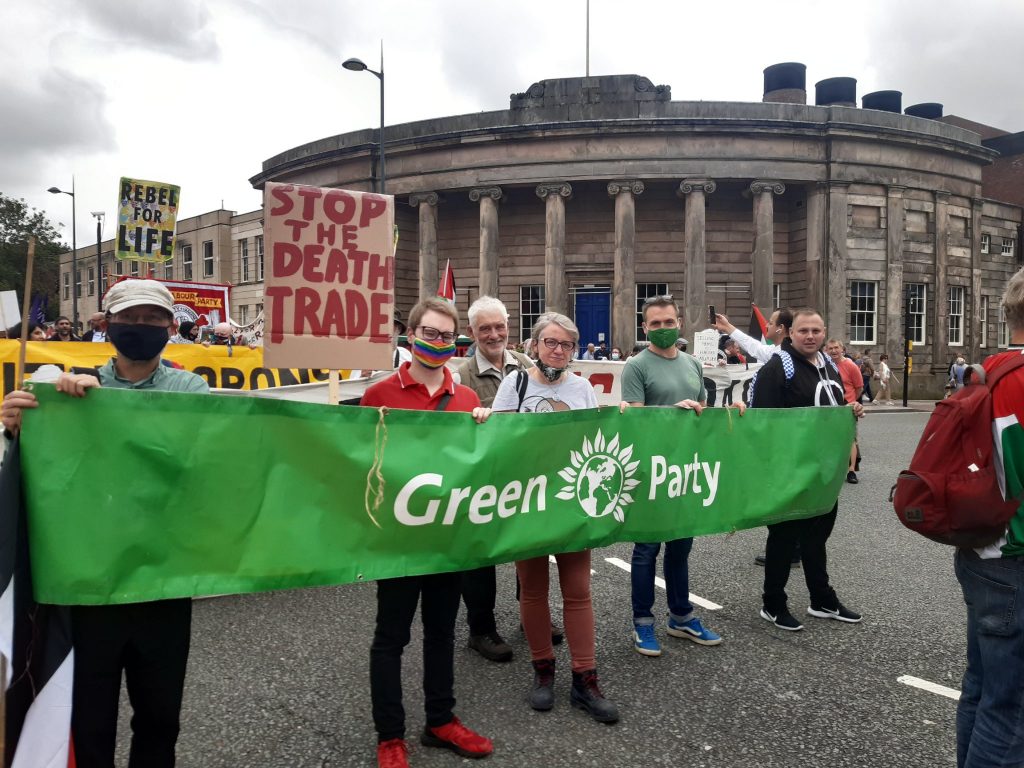 An Emergency Motion proposed by Green Party councillors for this Wednesday’s full council meeting calls on the council to use its nominated places on the ACC Board to block the arms fair planned for October 11-12.

Mayor Joanne Anderson has claimed that the council can’t interfere with bookings, despite precedents when a shooting exhibition and controversial performer were banned after being booked.

Now the Green Party motion warns that new developments show her stance threatens to damage the venue’s finances and have a knock-on impact on council taxpayers.

Green Councillor Lawrence Brown said: ‘This is information councillors didn’t have the last time the issue was discussed. It means that we have a duty to act not just to protect the reputation of our city as peace-loving, but council tax payers’ money.

‘The last time the council discussed this, the vast majority of councillors said they wanted this horrific arms bazaar blocked, but were told they couldn’t – the council claimed it didn’t have the legal power to decide who uses its venues.

‘Three things have changed since then. First, the council’s legal advice is being challenged in the courts. Second, bookings are being lost as performers and exhibitors refuse to be associated with this arms fair. Third, the strength of popular revulsion is growing every day.

‘If the council doesn’t act now, it will end up using council tax payers’ money to cover losses at the venue.’

Text of the Emergency Motion proposed for the council meeting on Wednesday September 22:

Council considers that to proceed with a weapons convention on 11th - 12th October 2021, ACC Liverpool Ltd risks a substantial negative impact on the Council's budget through the withdrawal of future business; this would likely mean that the Council, as sole owner of the company, would have to cover any budget shortfall by ACC Liverpool Ltd.

Already, the band Massive Attack have cancelled their booking of the venue and there have been statements in the media by the National Education Union and National Union of Students to confirm that they are considering their positions with regard to future bookings. More organisations may well follow if the weapons convention is not cancelled.

Council believes that the directors of ACC Liverpool Ltd should have taken account of this budgetary impact in any deliberations as to whether to proceed with the weapons convention. In addition, Council believes that, contrary to the previous advice which was the basis of the Mayor's motion to the Council meeting held on 21st July 2021, there is an opportunity provided by clause 13.2 of the ACC Liverpool Ltd Articles of Association for the Council to have a direct impact on the management of the ACC Liverpool Ltd by dismissing the directors and replacing them with new appointments opposed to the weapons convention.

Council confirms its opposition to the weapons convention for the following reasons:

1) Damage to the reputation of the Council, which is now seen as allowing a platform for weapons companies like Raytheon and Elbit – amongst many others – which are complicit with human rights abuses.

response to the Arms Fair, including the cancelled Massive Attack concert,

and the possible loss of union and political conferences. The Council will end up

the weapons convention. By failing to act when it has the power to do so, the

care what happens to their friends and families, when bombs, missiles,

drones, are supplied and then deployed in war.

Council therefore requests the Chief Executive to take the necessary steps to remove the directors of the ACC from their positions and to appoint new directors who commit to cancelling the weapons convention and pledge to never again booking such an event at the ACC.